OK, I needed to write my previous blog (Week 14, be sure to read it before reading this-one 😉 ) to get to the real stuff. 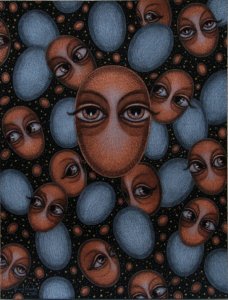 There was something that had been shimmering for a while, not really a blind spot anymore, but Good Ol’Bluie did everything he could to make me look at all kinds of different directions, and even prevented me to spell it out to myself, kind of a ‘taboo’ it seemed.

The talk in my previous blog about the medal is what did it. this lingered on in my mind after having posted the blog, and that’s usually a sign on the wall.

And then suddenly it opened up, it ‘spoke’ to me: actually the true burning desire of the characters of Cool Runnings was not to get a medal, but to participate, each for their own reasons: because they wanted to be what they are — Olympic Athletes, get away from the island, become the man they really are in stead of the eternal Junior to daddy, to help a best friend ever, representing their island as a significant part of their authentic identities, and the coach just wanted to be what he did best: coaching and using all his experience.

And the goal of the final race was to get beyond the finish-line, and in a way ‘be enough’, and validating all the efforts they put in the process.

And their victory was on many many other levels than ‘just’ winning a medal, as I mentioned in the previous blog.

What’s a medal about anyway….. more so: what is this thing about ‘competing’ we are so ‘on’ about? It’s just an opinion and a comparison, and anyway: you can win a gold medal in many other ways: by cheating (coach…), or because some misfortune happened to other contestants, as happened to our heroes, or the ones that are actually ‘stronger’ or ‘faster’ for some reason don’t show up, or ….

So it’s most definitely not always the one that put in the most effort or persistence or that went for the REAL gold — inner evolution, spiritual growth, transformation, …. — that gets the medal.

If that’s your case, if that’s how you got it: so then what, you have your medal….. well, then go to the mirror and look at yourself …. even if you didn’t cheat, you’ll know if you really did ‘The Work’.

Well Ok, all this I knew, mentally. Not new to me. Eazzzy peazzy. But it had not ‘sunk in’ yet, I did not ‘incarnate’ this wisdom… until I lived my own version of ‘Cool Runnings’ as I told in the previous blog.

How does this link to my own story, and in my profession?

Here’s how: I could have stayed in my comfort-zone, I could have made it a hell of a lot easier for myself on pretty much every level, and I sure would have gotten the shimmery success I thought I was after quite easily, I would have nailed the performance 1000%.

But I didn’t, because I have this burning desire to develop my potential to the bone, what do I say: until INSIDE my bones so that I BECOME my full potential. I deliberately and full-heartedly and in the deepest spirit of the MasterKey made it as hard and as ‘impossible’ as I possibly could, on many levels, and the whole process I went through was an absolutely blissful experience, inside myself, but also together with the people involved.

And so yes, in my perception ‘I lost a screw on the way to the finish’– as did they, some stuff didn’t quite go as wished for, or in my own language and true to my blogs 😉 : there was still one marble missing….

I was attached to a certain outcome, as I said in Week 12. And now it becomes clear: that outcome had a lot to do with me still adapting to a way of behaving, or functioning or ‘a kind of success’ that I actually do not believe in, that I do not agree with, that in truth doesn’t mean anything to me, that isn’t me. Except on that ego-level that so desperately wants to ‘belong’ and at the same time wants to be ‘better than’, and therefor is continuously comparing to others — for the sake of ‘existing in a world I don’t really even want to live in’. (gonna love this little ‘battling’ Dominica even more, unconditionally, so she can grow out off this, into ‘BigSista’  …. 😉 ….)

Another scene that got ‘stuck’ in my mind was when they carry their sled like a coffin over the finish-line…. now I see: I actually only got to the real finish-line of my own story just now, two weeks later ….

Symbolically, that ‘coffin’ stands (in my comprehension) for their old ‘ways’, that they overcame during the whole process, and it’s not those old ways that could get the ‘Cool Medal‘ of inner victories, their old blueprints had to be conquered to get where they wanted to be, so those had to be carried to the grave, as they did.

And in a symbolic way, like in the movie, I too stumbled over my own finish-line carrying the weight of …. a big chunk of my old blueprint, just now: the fear of disillusion….. 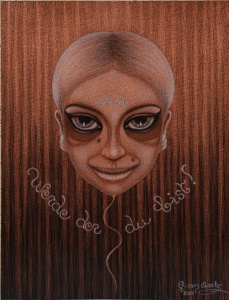 This was a big issue for me in the beginning of the course, I was really worried that doing this MasterKey and using all the skills would only bring me yet again one more disillusion, I even brought it up in the Alliances…. and in my mind, if the MasterKey would fail, that really REALLY would mean the end of me.

So when I ‘failed’ (in my old-blueprint-ego-eyes), I thought that that was it, it DIDN’T work, so for a brief moment I dove into the biggest disillusion of my life, since I had put ALL my hopes into this program, and I was prepared to just simply ‘stop’.

Luckily the new version was already strong and lucid enough, even if it took me 2 weeks now to really see and understand and be truly over the moon with joy about what I truly learned and gained, and with the numerous Cool Medals I won …. and that the illusion was that I would, that I COULD be, that I NEEDED to be like ‘them’ and therefor ‘belong’….. so thank you for being disillusioned 🙂 … I don’t wanna be praised for successfully not being me …. 😀 …..

So now I can finally truly say…. Cool Runnings, Peace be the journey…. 🙂

(and oh yes, as I said at the end of my Week14 blog: So here I go, RainbowColoredBobsled on the rollercoaster of life. Enjoying every bit of it. Sliding with grace and Burning Desire over the sometimes slippery ice of my own old creations….;) …. burning … ice… hint-hint…. : MELT! 🙂 )

Together we can change the World

Welcome to your new home on WordPress.com

MasterKey to My Core
Lifelines

Nothing is permanent . Rien n'est permanent

Today is the first day of the rest of your life
Sadaya Master Key =MAD CHANGES!!

MKMMA...people you know who you are..this course changes your outside from the inside and changes it BIG TIME!

My experience in the "Masterkey Master Mind Alliance" MKMMA