This MasterKey -experience is absolutely my biotope, feeling like a fish in fresh, vivid water. 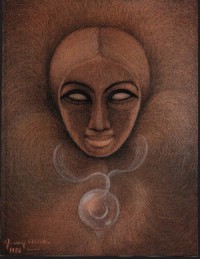 All my life, I have had issues with the notion of ‘time’ and oh, also when I was very little, I used to mix time and space up, in any kind of way. Somehow they must have seemed ‘the same matter’ and ‘of no matter’ for and to me.

Of course, I got ‘educated’, and I manage very well now, thank you. (Or, well, in the way that my reality of the moment seems to ask of me. Inside, somewhere down-deep, not a lot has changed, the magma of time and space and forms and no forms is still just as, well, magma-like.)

I had (and occasionally still have) many dreams that later on turned out to be ‘predictions’ — like when I was about 8 or so, I dreamed about a huge (the most important actually) aspect of my life, being a musician, up until when I was about 20, and one event even 40, things and stuff I could absolutely NOT know consciously about at the time I dreamed it–, or I find myself in situations where suddenly a gesture or word feels like if they belong to ‘two time-realities’: the one of that moment, and one I already lived some time before — but have no apparent conscious memory of, yes, ‘déjà vus’. 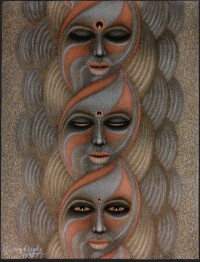 When I started the energy-work, I somehow got ‘called’ to also get into working on ‘genealogical lines’, on stuff that since generations had been stored into the DNA, and creates our blue-prints of behavior. Which was very enlightening: suddenly I could ‘see’ and understand the links between past events (from generations before) and behavior in the present, and ‘clean it out’, so that in time, the DNA can ‘change’, or at least some parts be made inactive, and others that are ‘dormant’ get a ‘wake-up-call’. Fascinating.

During one sit last week, when the assignment was to release negative thoughts/emotions, I suddenly saw my new blueprint, the one in my DMP, being ‘tattooed’ into my cells and my DNA. So: fast-forwarding into the past, to create a new future. Great. (hey, I’m actually becoming a Master of Time here 😀 , oh well, AND of matter, for that matter 😀 )

This week, with the new assignment during the sit, focussing on a wonderful place/event and ‘live it in all it’s details’ with all the positive energy that comes with it, suddenly I was drawn back into a past event that happened a few years ago and that left a deep and actually life-changing impression in ‘my matter‘.

Place of ‘crime’: the Blue Cave, of that glorious little gem in the Mediterranean, Kastelorizo, one of the Dodekanesos-islands.

When we wanted to get inside (with a small motor-boat, you can only get there over the sea), due to the strong winds, the sea-level was unusually high, and therefor the entrance of the cave had become very narrow. The boatsman decided to risk it anyway, we had to lie down on the floor of the boat and very, very slowly he went into the entrance, a quite long stoney ‘corridor’, which immediately made me think of a birth canal.

Once inside the cave (the way in seemed to take FOR EVER, and was actually quite frightening), at first, you could see……. well, nothing. Pitch-black, and complete silence. So first emotion: big disappointment, I had heard it was supposed to be SO beautiful…….?? But then after a while, suddenly, the whole cave lit up in the most magnificent spectrum of blue colors, dancing on the ceiling and the walls, and the water underneath was of a breathtaking beauty as well……. If you have not seen this, you can simply not imagine it. 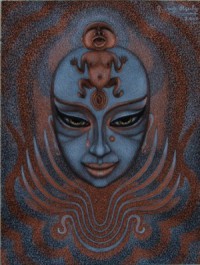 Then the captain said we could get out of the boat, and swim for a while. I needed only half a word, IN, I went. The best feeling ever, gorgeous warm water, and that light! Those colors! The sounds of the water, amplified and echoing all around….!! I truly felt in heaven, and suddenly felt like ‘this is the womb of the earth, and WHAT an incomparable feeling to be inside and nurtured and, simply WELL’ …. it felt like in an instant I had made peace with my whole past and was preparing myself to be born again, finally AS MYSELF.

So, this was the space I was drawn back to during the sit, and for some reason, I had to place the cave in my heart-center. And then suddenly, one by one, all of my animals, all the dogs I ever had, all my cats came and joined me (well, they stayed nice and dry inside the boat :p ), and then a horse, and an eagle, and an elephant (Ganesh!) and a lion, and a unicorn, and, and, and …….. a whole Arch of Noach was being created right in front of my eyes, and each animal that was added heightened the feeling of joy, and bliss, and —- I have no words to describe the wonderfulness of the feelings that arose. 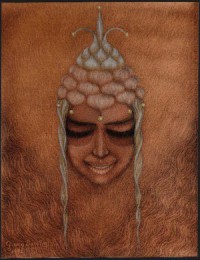 And then, top of the bill: a dolphin came swimming towards me, and actually ‘installed itself inside my cells’  —- this one, I actually forgot about over the last few years, but I once had an obsession with them, especially with the way they communicate. So it’s back now! The channel is open again! 🙂 (I know, I sound nuts, but hey, it’s MY fantasy here eh ! 🙂 )

And then it became clear: one of my aims is to have a deep and genuine connection and communications with animals — for several reasons, but one of them being that they are all different aspects of the ‘soul’, they all represent specific qualities and feelings (yes, like totem-animals), and in my work, my music as well as my energy-work, they already came up and joined to make me conscious about ‘inner and outer nature’, and in that sense they are all different aspects of myself, that want to communicate to me in their ‘symbolic form’.

I felt SO welcomed and complete. And grateful. And humbled in a magnificent way. And this thought came up “from here, after having dug into the past to ‘understand’ your ‘now’, you can go back to your future, the one that already exists from since you were born. Because the ‘now’ of this moment, is the past of that future. Remember the feeling, hold the thought, the matter will follow.”

When I came out of the sit, I remembered Platon’s Allegory of the Cave. 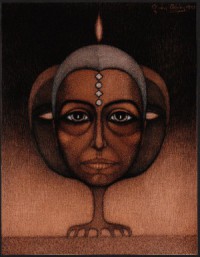 Well, that’s what it is, only: inside out. The ‘real’ reality, is inside, and the ‘outside’ is the reflection.

2 thoughts on “Week 5 : Allegory of the Cave — fast forward to the past and back to the future.”

Together we can change the World

Welcome to your new home on WordPress.com

MasterKey to My Core
Lifelines

Nothing is permanent . Rien n'est permanent

Today is the first day of the rest of your life
Sadaya Master Key =MAD CHANGES!!

MKMMA...people you know who you are..this course changes your outside from the inside and changes it BIG TIME!

My experience in the "Masterkey Master Mind Alliance" MKMMA